The AT-8 is a Tier VI British Tank Destroyer. 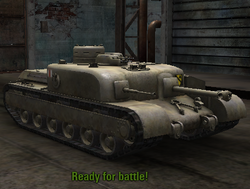 One of the eighteen proposals for an assault tank for Britain. It is directly evolved from the AT-7 and was not accepted into service. The AT-16 would be accepted in its place.

The AT-8 is a large, heavy, slow Tank Destroyer. It is a British tank, and is known primarily for its strong frontal armor and extremely fragile tracks. It has thin rear and side armor, and a vulnerable cupola at the top that is easily penetrated. It’s sode are equipped with side skirts, which help protect it from HE and HEAT shells.