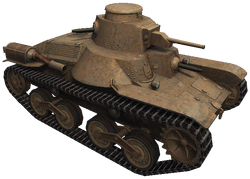 The Ha-Go has the same armament choices from the Chi-Ni so it plays in a similar fashion to it. It has less hit points and is naturally faster so it can play as a faster version of the Chi-Ni. It is not a very fast light and can be considered sub-par to other light tanks.

The Ha-Go as mentioned above, should be played as a faster Chi-Ni. It should be cautioned that you don't try to take a charge up, as it will usually end up with you getting knocked out. Both top guns are of that of the Chi-Ni, a quick firing 37mm and a hard hitting 57mm .

The Type 95 Ha-Gō was created in demand for a tank to keep up with the motorized infantry, however, it was not designed to fight other tanks. The tank seemed to be effective for infantry support and despite questions from the infantry, the tank was put into production in 1936. Approximately 2,300 vehicles were produced, making it the most produced Japanese armored fighting vehicle of that time.